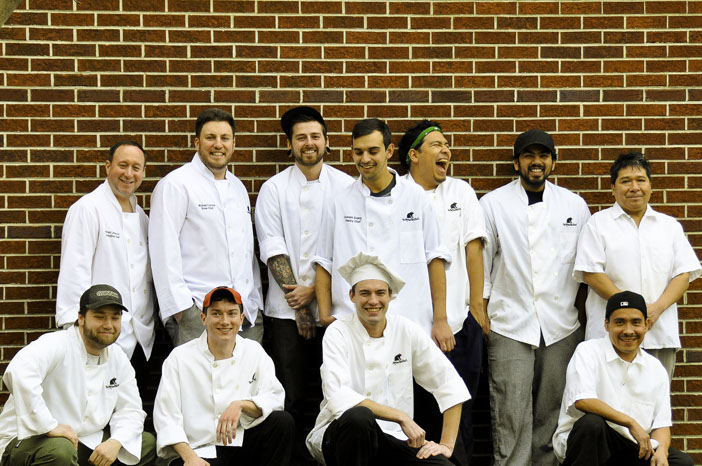 The Frog and The Peach

The Frog and The Peach was founded in downtown New Brunswick, NJ in 1983 by husband and wife team Jim Black and Betsy Alger, both Rutgers University graduates.  The restaurant occupies an old industrial building (c. 1876) located at 29 Dennis Street, which originally housed printing presses for the local paper, The Home News.  It was later used for various types of manufacturing and was last used as a leather suitcase handle factory. Pioneering the redevelopment and subsequent renaissance of New Brunswick, they carefully gutted and renovated the space to create a multi-leveled contemporary restaurant that reflects the spirit of its industrial roots.

In April 2012,  Executive Chef Bruce Lefebvre purchased the restaurant from Betsy and Jim.  Lefebvre is known for his modern take on American Cuisine and for staying true to the authenticity of The Garden State’s world-class agriculture and fisheries.  He combines his classical training from The Culinary Institute of America with an eagerness to explore and share influences and ingredients from cuisines throughout the United States and the world. “The Frog has always been proud to highlight local ingredients,” says Chef Bruce. “In fact, 30 years ago, Betsy’s first menu had on it an Arugula Salad with Hunterdon County Goat Cheese, Walnut Oil and Champagne Vinegar (menu price $4!).”

The Frog and The Peach has received critical praise for its fine food, extensive and approachable selection of wines, genuine hospitality, and ambiance.  It was named New Jersey’s Best “All Around” restaurant, been selected for inclusion in “America’s Top Tables”, and was most recently selected as one of New Jersey Monthly’s “Top 30 Restaurants in NJ”.  The Frog is repeatedly chosen as among the most popular restaurants in the state by the Zagat Survey.

Chef Bruce of Frog and The Peach Executive Chef and owner, Bruce Lefebvre, began cooking at age 10 with his sisters when they would sift through mom’s New York Times Cookbook for breakfast-friendly recipes to prepare while their parents were asleep on Saturday mornings.  Eternally curious and always bold, young Lefebvre was known for trying everyone’s food at the table and seasoning tomato sauce and soup at the stove behind mom’s back.

While Bruce’s friends worked on fishing boats and golf courses, his first job was at The Yankee Clipper on the oceanfront in Sea Girt, New Jersey.  I remember being hired by the Executive Chef as their first dishwasher after a major renovation.  Chef made amazing stocks and soups, and left every night with, who appeared to me to be the most beautiful waitress at the Jersey Shore!  For a 15 year old that seemed to be a fine career choice?.

However, it was not until after graduating from Wake Forest University with a bachelor’s degree in English that Bruce found his calling while on a summer trip across the country.  Upon returning to the East Coast, he enrolled at The Culinary Institute of America.  Lefebvre did his externship for the Buckhead Life Group in Atlanta, whose properties include The Buckhead Diner, 103 West and the Atlanta Fish Market.

The day after graduating from the CIA, Bruce started working at The Frog and The Peach.  After 2 years he left to further his career in New York City, working for Charlie Palmer at Aureole and doing stagieres at Daniel and Lespinasse.  Bruce ultimately returned to The Frog, became Executive Chef in 2001.  He has the utmost respect and appreciation for Betsy Alger and Jim Black, the founders and long-time owners of The Frog, for giving him his first big break and eventually selling him The Frog and The Peach in 2012.

His spare time is spent eating and exploring with his wife and three children and hanging with his esteemed crew at The Frog.

The restaurant’s unique name comes from the title of a Dudley Moore and Peter Cook comedy routine about a restaurant in the Scottish moors that served only Frogs and Peaches — a culinary concept that was never considered for the restaurant!

A great video of our first 25 years